Sometimes I wish I were a dude 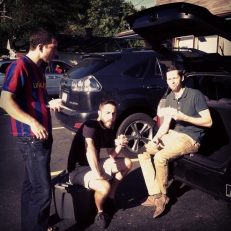 This post is an excerpt from my piece in the booklet, Courageous Conversations (2013), edited by elizabeth mcmanus and published by RCWMS press. Search books on the RCWMS website to order ($5).

1.) Dudes aren’t expected to do as many dude things with one another. Oh, they might have a pancake breakfast once a month at the church but it’ll be on Saturday and they’ll cite wanting to spend more time with the wife as their reason for missing and some woman will surely end up giving them a pat on the back for being that sort of family man. Women’s bible study, on the other hands, meets every Thursday morning according to the bulletin. It wasn’t until a girlfriend recently shared aloud that she just “doesn’t do groups” that I thought to myself, “Really? You mean it’s okay for a woman to not hang out in packs? It’s okay for me to be kind of a loner? You mean that’s not just for cowboys and Jack Reacher?”

2.) Dudes tell it like it is (or at least how they think it is). This, in turn, frees me up to do the same. I can be competitive without offending and interrupt without clamoring and trust that no one’s analyzing my every move more than I because I am, afterall, a woman. It’s the emotional labor expected of being a woman that I find so awkward and unbecoming on me. A friend tells me her husband is lonely and would my husband be willing to call him up? Sure, I think. But why not just ask him? Why do I have to be responsible for my husband’s social calendar on top of my own? Another friend says she’s worried about a girlfriend of ours. Okay, I think. But what do you want me to do about it? Why do I have to sit here strategizing when we might as well just ask her? And who made it a woman’s job to anticipate the needs of others before they’ve even been named? Call me callous, uncaring, or unchristian but I don’t want this undercover job.

3.) Dudes drink beer at lunch. I can’t tell you how jealous I am of a standing date my husband has every Friday at Sam’s Quick Shop to grab a pint with a buddy who’s on lunch break. When I asked a girlfriend why we rarely drink together, she said she didn’t really like alcoholic all that much and, besides, there were those calories to account for. It’s no one’s fault really, a freak of context that I’ve found myself in a place where the lady drinkers are few and the wine lovers among them fewer. But I want the carelessness or carefreeness of dudes who don’t worry as much about growing guts and going out budgets. It helps, too, that they’re not worrying about making babies in their bellies, or eyeing their friends shrewdly when they pass on a French 75.

Hear me when I say I want to act like a dude not a man. Because, of course, I know that the dude is a caricature, no more an accurate picture of all of manhood than my one experience is of womanhood. I know, too, that no one is stopping me from acting not like a dude, but as an independent, straight-talking, “what the hell it’s noon” kind of woman. Perhaps it’s I who has all the hang ups about the expectations others have hung round my neck.

And that’s just the thing. I don’t know who’s saying.

Only that I want a say.

3 responses to “Sometimes I wish I were a dude”