Women who go to women’s retreats 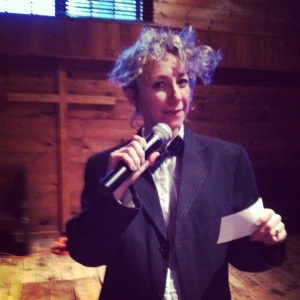 Two weeks ago, I went to my first women’s retreat. “Pray for me,” I laughed to anyone who would listen.

Two friends from church picked me up in a sedan on Friday afternoon, the sun high and the air dry. “Do you want the front seat?” one of them asked. “Ah, the pressure!” I cried. The front seat is for the shotgun messenger, the one with words that are as numerous  as the miles. I settled in for a few minutes before rummaging around the glove compartment for an iPod cable to deflect attention. Soon, though, I found myself turning the volume down a little, then a little further, then yanking the cable out altogether. We were telling stories, tumbling stories. How we met our husbands. What kind of parents we thought we’d be. Why the three of us were driving up into the mountains now.

I recently attended the North Carolina Women’s Preaching Festival here in Durham. Jeanette Stokes, founder of the Resource Center for Women in Ministry in the South, gave the keynote speech and in it reflected on her feminist “conversion.” She remembered it vividly. At the time she was an undergraduate student at Smith College but living and taking classes at nearby Amherst for the year. She relished being around all those young men. Young men in the classroom and the cafeteria and everywhere on campus. Until she wondered why she cared so much about all those young men. Why being around all those young men made her feel so special. (She was only one of 24 women living on campus at the time.) It was then she decided that men garnered enough of our culture’s praise and attention. It was women who she would devote her life to, to listen to them and to value them.

There were eighty women nestled into the hillside in Valle Crucis. Old women, young women, black women, white women, baby-bearing women and lipstick-wearing women. Our speaker was a woman. Our worship leader was a woman. Regis Philbin was a woman (see pic above), or so he was for the purpose of the skit team. Funny thing is, I reflected later, it didn’t feel overly “womanish.”

I admit that “womanish” often scares me. Seminars, studies, books, and pink-felted bibles geared toward women can make me feel like a market segment rather than a whole person. When I heard about the IF Gathering, a women’s conference taking place in Texas next year, my first thought was, “Oh, cool” and then “Oh, no” as I imagined mingling with 1,200 of my kind. I didn’t know if it was the introvert in me or the feminist that cringed, thinking, wouldn’t this all be more enjoyable if we stopped segregating the sexes?

For many of us under 40, it was our first women’s retreat. Others were skeptical, too, beforehand. And surprised when they got there. “What did you expect?” I asked one young woman. “For it to be cliquish,” she said. But it wasn’t, we marveled. There was a group hike to a hermitage, community yoga in the farmhouse, and a few rousing games of table tennis in which I was equally matched. On the care ride home, we laughed over first periods and first trips to the gyno. The womanish shoe fit at times, and when it didn’t, there was space to talk about it.

We had our Talking Taboo launch party last weekend and the Holy Spirit was fierce as five of our contributors read aloud their essays. I dare say my cup ranneth over with the ruah of women. I felt like I belonged to a tribe of peace-makers, wielding anger and mercy with equal finesse and fortitude. In my comments to the crowd, I likened myself to a spiritual midwife, helping to birth these courageous contributions into the anthology, and now the world.

Women-only books, conferences, and retreats can seem counterproductive to kingdom work. At the same time, I’m aware of a cultural history in which women overvalue the presence of men because it’s validating to have “people of power” at the table. I find myself doing this not infrequently; in fact, if I’m being honest, I did it when I first put a man on the launch party flyer for Talking Taboo because I was worried that men wouldn’t come to the event. Silly me. They came anyway. And still we were enough. Women are enough.

There’s something to be gleaned from women-only spaces, even if they do make me nervous sometimes. It feels important that I learn to love them because I think this has something to do with learning to love myself.That being said, I may never love 1,200 of us in the same room.

4 responses to “Women who go to women’s retreats”