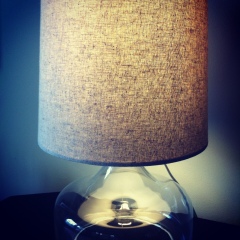 We have a rule in our house. It’s a non-verbal rule, a cue really, that when the lights go out, so too does the chatter. This is not the time to ask Rush whether we should post the folding bookshelf on craigslist or what he thinks about the power of paradox. But one gets impatient with rules when she’s a writer and ideas come quicker than sleep.

The lights are still on. I ask, “Do you want to know what I learned?”

I am always learning things, too many things like how Seamus Heaney thought poetry, like Jesus, “takes our eyes away from the obsession of the moment” or how according to Fred Bahnson it’s the outskirts of ecosystems (and communities) where the “greatest exchanges of life take place.” There are so many things that I don’t know where to put them unless I them put in someone’s ear.

Rush is shirtless, leaning up against the dark framed bed. He hasn’t reached for the light yet but the alarm is set and the magazine flipped down. I try to keep this short.

“It’s John O’Donohue, you know that Irish poet, well it’s his book and he’s so philosophical. I can’t write like that. I admire it, not envy it, but I admire it because he can talk and talk and talk and there are no footnotes. Is that plagiarism, you think? No. Anyway, I know, I know, what I learned. It’s that belonging and longing are two sides of the same coin.”

He makes me a little mad but I know better. I know the light is turning yellow and I should be slowing down but I’m not. I go even faster.

“Yeah. They’re married, paired. It’s a paradox. It’s everywhere. I haven’t quite figured it out how it fits with my narrative but it makes sense and I will.”

So I get flustered. Like I’m not explaining it right. I try to explain it using more words but it just gets more worse and I start to think I married someone stupid.

Marriage counselors tell you, Ephesians tell you, not to let the sun go down on your anger. Sometimes, though, the night is the only place I can take my anger to die.

I stew for a minute under the covers. Then it’s God’s turn to put something in my ear. “You’re not frustrated with Rush. It’s you, Erin.”

I’ve learned this before from God, that business about logs in your own eye that need to be addressed before pointing out the speck in your neighbor’s. I’ve also heard that that which most annoys us in others often has something to do with the parts of ourselves we’ve not made peace with. We’d do well to ask ourselves, “What does my reaction toward that person say about what’s going on with me right now?”

I was frustrated over a week of writing that was just ugly. For having thoughts in my head so frenzied only to have them frizzle out on the page. For starting every sentence of my manuscript with I was, I went, I want.

A good night’s sleep didn’t work any miracles. I dreamed of my writing professor and woke up sad not to have her input anymore. Rush kissed me goodbye and I told him his striped shirt looked nice. He apologized.

And I got out of bed, a little worn, my eye still twitching, but ready to learn at the feet of my new teacher.

Her name is Compassion.

One response to “Undercover compassion”