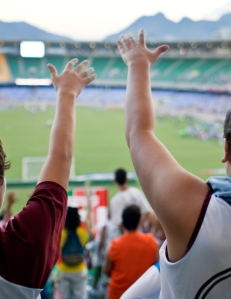 I met with a spiritual director two years ago who encouraged me to think about why my expectations for life were so low.

“What do you want to talk about?” she asked at the beginning of our session.

“Well, I don’t know, exactly. Everything is fine really. Rush is happy at his job, we’ve found a nice group of friends, and it feels like a gift to be here in Durham doing what I love.”

She nodded and took a sip of her tea.

“Functioning?” she asked, parroting my words.

I sputtered back with a smack of irritation, “Yes, functioning. I don’t expect much more than that. Besides, I’ve been worse off.” I folded my hands neatly on my lap, adding curtly, “We are not promised the feel-goods in this life, you know.”

“What are we promised?” she pressed. “What does God promise you?”

This was getting irksome, now, like some fill-in-the-blank Sunday School lesson that everyone knows the answer to but no one responds because it’s so mind-numbingly obvious. God promised things like salvation and eternal life and grace and love and even answered prayers sometimes but God also promised my suffering, so why should I complain if things were just flat-lined, a holding pattern between joy and sorrow? I thought I remembered the Bible saying something about spitting out lukewarm Christians but that sounded awfully over-the-top.

“I trust God, I do,” I insisted. “I just don’t expect anything in particular. I’d rather be surprised.”

She put her cup of tea down, slowly. “You’d rather not be let down, too, I suppose.”

Was that it? Was I protecting myself from feeling the hurt of disappointment, the sting of my own ingratitude for a pillow-top life?

Over the holidays, I read Ann Voskamp’s widely popular One Thousand Gifts: A Dare to Live Fully Right Where You Are (Zondervan, 2010). Ann writes about being thankful to God for all things, every thing, bad things. She writes, too, of how expectations deal death to gratitude, asking,”Without expectations, what can topple the surprising wonder of the moment?”

I am reminded of an article I read recently explaining why Americans love the underdog; there is less to lose and everything to gain if you never expected your team to come out on top. What’s harder is gunning for the one who is supposed to win, the one with hype and hysteria and the crazy, smug fans.

I have often played the pessimist in my life. I hedge my bets, numb my desire, and say, “I’ll take whatever I can get.” But rather than feeling more grateful, I have felt unfaithful.

Did we not just rehearse the expectation of Christ’s birth during advent? Were we not given prophecies shaping us to be an expectant people? Was our ability to hold out for what we had been promised through exile and excess not a sign of our crazed belief?

I do not have any goals for this next year; I find myself too attached to their specific outcomes. Instead, I want to be a woman with expectations who doesn’t let the gift of surprise stop her from banking on the one with the proven record.

Even if she has to align herself with a few hopeless fanatics to do so.

“Let’s press on to know the Lord;
whose appearing is as certain as the dawn;
who will come to us like the showers,
like the spring rains that give drink to the earth.”
– Hosea 6:3

One response to “Great Expectations”